Saturdy 6th January, 8.45 p.m
Teatro Comunale
Corso Martiri della Liberta’, 5
A fun charity concert. Tickets cost 5 euro and can be bought from the theatre’s ticket office (probably even on the night). The money which is collected from this event will be donated to a local nursery school.

This is a really lovely exhibition of nativity scenes from all over the world for you to admire. Admission is free.

The Arrival of ‘Befana’

This is a traditional Italian celebration for children. An ugly, but kind old woman called ‘Befana’ visits each child on the 5th January during the night. If the child has been good, she leaves a stocking (sock) full of sweets, which the children open on 6th January when they wake up. However, if the children have been naughty during the year, she leaves a stocking full of coal! Celebrations in Piazza Municipale begin at 4 p.m. with music and entertainment for children. At 5.30 p.m. Befana will arrive and give all the children a stocking. The party ends with the Three Wise Kings and an enormous traditional bonfire in Piazza Trento Trieste.

Look out for other local villages who also celebrate the arrival of Befana. In Pontelagoscuro she even climbs down the bell tower! In Venice she flies across the piazza!

Befana at Castello Estense
Saturday 6th January
For children (5 – 10 years)
At 4 p.m. there is a special visit from Befana who will take the children on a tour of the castle, read stories and play games.
(You need to book and buy tickets in advance for this event at the castle’s ticket office or go on-line to: www.castelloestense.it)

Donne a Corte – Women at Court
Saturday 6th January
At 7 p.m. and 7.30 p.m. there is an interesting themed guided tour of the castle which explores the power of the women at court: “Donne a corte. L’altra faccia del potere”. The tour ends with an aperatif at the Castle’s caffeteria. (You need to book and buy tickets in advance for this event at the castle’s ticket office or go on-line to: www.castelloestense.it)

Corso Ercole d’Este
Every day, including January 1st, from 9 a.m. – 7 p.m.
This inspiring exhibition, which has been visited by our Primary and Butterflies classes, is open until the 7th January. A guided tour as well as the audio guide is highly recommended by many visitors who have been to the exhibition.

Theatre for Children – The true story of Snow White

Sunday 21st January, at 3. 30 p.m.
Sala Boldini
Tickets can be bought on the day at the entrance to the theatre and cost 6 euro. This particular performance is recommended for Primary school children.

La Tampla – Traditional Befane Parade
5th January, from 4 p.m.
Historical centre
This is a traditional celebration where a parade of ‘Befane’ (lots and lots) navigate the canals of Comacchio. It ends with an award ceremony for the best dressed Befana. 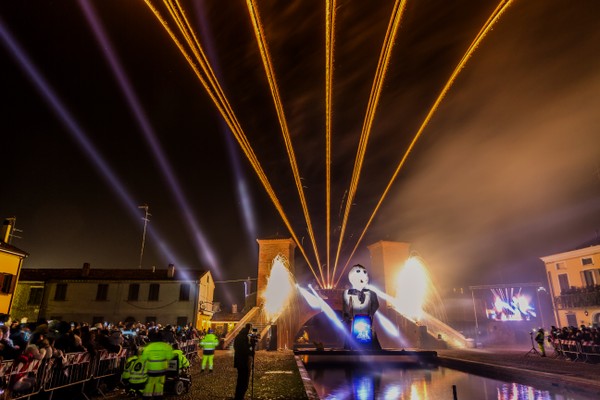 The Firemen’s Befana!
Torre dell’Orologio (clock tower), Historical Centre
6th January, at 3 p.m.
Befana will climb down the clock tower and join the children awaiting her arrival. She will then give out sweets to them.

“Avan la Vacie”
Trepponti (on the bridges of Comacchio)
6th January, from 6 p.m.
There will be fireworks and music and Befana will meet and greet the children.

What’s on in Venice:

Regata Race
6th January, from S. Toma’ to the Rialto Bridge on the Grand Canal, at 11 a.m.
To celebrate the epiphany there is a very famous and fun boat race in which hundreds of rowers dress-up as Befana and row along the Grand Canal. An enormous sock at the Rialto bridge marks the finish line.