The Arrival of Befana

This is a traditional Italian celebration for children. An ugly, but kind old woman called ‘Befana’ visits each child on the 5th January during the night. If the child has been good, she leaves a stocking (sock) full of sweets, which the children open on 6th January when they wake up. However, if the children have been naughty during the year, she leaves a stocking full of coal!

Sunday 6th January at 4 p.m.
Dancing and entertainment in the piazza until the arrival of Befana at 5.30 p.m. A bonfire will be lit at 6 p.m. in Piazza Trento Trieste.

Saturday 5th January
Palazzetto dello Sport at 8 p.m.
This charity event provides sport and entertainment for children and includes special guest appearances by some of Ferrara’s very own sporting personalities and a stocking from Befana for each child. You are asked to give a donation at the entrance and the money which is raised from this event will be given to charity.

The following events at the Castle need to be booked in advance.
Telephone the Castle at 0532 299233 or email: castelloestense@comune.fe.it where they will also be able to tell you more about prices.

At 3. 30 p.m. – a guided tour of the Castle with actors who will tell the story of Ariosto’s life and some of the characters from Orlando Furioso.

The Castle will be open for guided tours from 11 a.m. – 3 p.m. with a special opportunity to admire some of Ferrara’s sacred paintings.

‘Estensi per tutto l’anno’
At 3.30 p.m. there will be an exciting tour of the castle for families, with children aged between 5 and 10, who will help create a calendar with famous members of the Estense family.

‘L’arte del banchetto alla corte degli Estensi’
At 4 p.m. there is another tour which takes a look at the art of Renaissance banquets, the kitchens, the cooks and favourite recipes used during the reign of the Estense family. This event ends with an aperitif in the Castle’s café.

Dolci, caramelle e preziose leccornie (Sweets!)
At 4 p.m. a tour for families, with children aged between 5 and 10, to celebrate the arrival of Befana.

Theatre for the family

Sala Estense, Piazza Municipale
Tickets are on sale on the door from 3 p.m. (5 euro for children, 6 euro for adults)

Teatro Boldini – Via Previati, 18
The performances start at 3.30 p.m. Tickets can be bought on the day at the entrance to the theatre from 2.30 p.m. and cost 6 euro.

The ticket office is next to the theatre. You can also book tickets on-line (www.teatrocomunaleferrara.it) or email: biglietteria.teatro@comune.fe.it

Palazzo dei Diamanti
A last opportunity to visit the exhibition which is open until 6th January (inclusive). See the special opening times below.
Open every day from 9 a.m. – 7 p.m.
Open also on 1st & 6th January
Open on 31st December until 11.30 p.m.
Open on 4th & 5th January until 10.30 p.m.
(The ticket office closes half an hour before closing times)

Competition and Parade of the ugliest Befane!
Ponte dei Trepponti at 3.30 p.m.
If you would like to enrol, you can do so from 3 p.m. onwards

La Tampla’ – Traditional Befane Parade
Historical centre at 4 p.m.
This is a traditional celebration where a parade of ‘Befane’ (lots and lots) navigate the canals of Comacchio. It ends with an award ceremony for the best dressed Befana.

Arts and Crafts for children
Antica Pescheria at 5 p.m.

Manifattura dei Marinati
10 a.m. – 12.30
Befana arrives and hands out stocking to all the children

The Firemen’s Befana!
Torre dell’Orologio (clock tower), Historical Centre, from 11 a.m.
Befana will climb down the clock tower and join the children awaiting her arrival. She will then give out sweets to them.

At 3 p.m. Befana will also give out stockings to the children in the historical city centre

From 4 p.m. Via Edgardo Fogli – hot drinks and sweets for everyone

From 5 p.m. Trepponti, Piazza Luca Danese – A snack from Befana

From 6 p.m. Trepponti, Piazza Luca Danese – Farewell to Befana with music, dancing and fireworks along the canals

What’s on in Venice 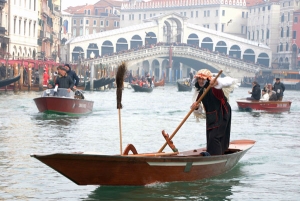 6th January
Starting from Palazzo Balbi at 11 a.m. to the Rialto Bridge on the Grand Canal

To celebrate the epiphany there is a very famous and fun boat race in which hundreds of rowers dress-up as Befana and row along the Grand Canal. An enormous sock at the Rialto bridge marks the finish line.

Sorry, this entry is only available in Italian.